A large part of my audience over at Math ∩ Programming are industry software engineers who are discovering two things about mathematics: it’s really hard and it opens the door to a world of new ideas. In that way it’s a lot like learning to read. Once you’re mildly fluent you can read books, use the ideas to solve problems, and maybe even write an original piece of your own.

Many people who are in this position, trying to learn mathematics on their own, have roughly two approaches. The first is to learn only the things that you need for the applications you’re interested in. There’s nothing wrong with it, but it’s akin to learning just enough vocabulary to fill out your tax forms. It’s often too specialized to give you a good understanding of how to apply the key ideas elsewhere. A common example is learning very specific linear algebra facts in order to understand a particular machine learning algorithm. It’s a commendable effort and undoubtedly useful, but in my experience this route makes you start from scratch in every new application.

The second approach is to try to understand everything so thoroughly as to become a part of it. In technical terms, they try to grok mathematics. For example, I often hear of people going through some foundational (and truly good) mathematics textbook forcing themselves to solve every exercise and prove every claim “left for the reader” before moving on.

This is again commendable, but it often results in insurmountable frustrations and quitting before the best part of the subject. And for all one’s desire to grok mathematics, mathematicians don’t work like this! The truth is that mathematicians are chronically lost and confused. It’s our natural state of being, and I mean that in a good way.

Andrew Wiles, one of the world’s most renowned mathematicians, wonderfully describes research like exploring a big mansion.

You enter the first room of the mansion and it’s completely dark. You stumble around bumping into the furniture but gradually you learn where each piece of furniture is. Finally, after six months or so, you find the light switch, you turn it on, and suddenly it’s all illuminated. You can see exactly where you were. Then you move into the next room and spend another six months in the dark. So each of these breakthroughs, while sometimes they’re momentary, sometimes over a period of a day or two, they are the culmination of, and couldn’t exist without, the many months of stumbling around in the dark that precede them.

Wiles discusses what it’s like to do mathematical research here, but I’d argue that the same analogy largely holds for learning mathematics.

If you’re going to get anywhere in learning mathematics, you need to learn to be comfortable not understanding something. Speaking with experienced mathematicians, and reading books written by them, almost always feels like the following sketch about math class as imagined by kids (clicking the image will send you to Youtube). 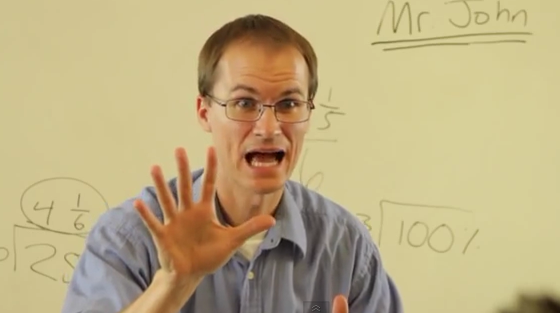 Aside from being absolutely hilarious, the video has a really deep and probably unintentional truth, that the more mathematics you try to learn the more you feel like the poor student! The video especially resonates when, toward the end, the teacher asks, “Do you get it now?” and the student pauses and slowly says, “Yes.” That ‘yes’ is the fledgling mathematician saying, “I obviously don’t understand, but I’ve accepted it and will return to it later (maybe).”

I’ve been in the students’ shoes a thousand times. Indeed, if I’m not in his shoes at least once a day then it wasn’t a productive day! I say at least a dozen stupid things daily and think countlessly many more stupid thoughts in search of insight. It’s a rare moment when I think, “I’m going to solve this problem I don’t already know how to solve,” and there is no subsequent crisis.

But I’m comfortable in my discomfort. This is something that has been bred into me after years of studying mathematics. I know how to say, “Well, I understand nothing about anything,” and then constructively answer the question, “What’s next?” Sometimes the answer is to pinpoint one very basic question I don’t understand and try to tackle that first. Other times it’s to learn what I can and move on.

I had a conversation with an immensely talented colleague, a PhD candidate at UM Ann Arbor and a far more talented mathematician than I, in which she said (I paraphrase),

If I spend an entire day and all I do is understand this one feature of this one object that I didn’t understand before, then that’s a great day.

We all have to build up our insights over time, and it’s an often slow and arduous process. In Andrew Wiles’s analogy, my friend is still in the dark room, but she’s feeling some object precisely enough to understand that it’s a vase. She still has no idea where the light switch is, and the vase might give her no indication as to where to look next. But if piece by piece she can construct a clear enough picture of the room in her mind, then she will find the switch. What keeps her going is that she knows enough little insights will lead her to a breakthrough worth having.

And it’s not even like one needs to understand every piece of a mathematical argument to have some useful insight about it. Sometimes I will just accept some detail of an argument and focus on the bigger picture, and other times the big picture will be completely mysterious and I will focus on the details. The math isn’t going anywhere. I can always come back to it, and it can often happen that one particular detail doesn’t hinder my insights (as you do more mathematics, insights come on a bigger and bigger-picture scale).

So, dear reader aspiring to grok linear algebra or calculus or any mathematical subject, I suggest you don’t worry too much about verifying every claim and doing every exercise. If it takes you more than 5 or 10 minutes to verify a “trivial” claim in the text, then you can accept it and move on. Thinking about other problems in the mean time is a healthy way to clear your mind, and even better is working with a friend. Sure, sometimes you can’t get away without working out every detail. Sometimes you just have to bang your head against a wall for an hour to get through the really important theorems. But more often than not you’ll find that by the time you revisit a problem you’ve literally grown so much (mathematically) that it’s trivial.

What’s much more useful is recording what the deep insights are, and storing them for recollection later. Because every important mathematical idea has a deep insight, and these insights are your best friends. They’re your mathematical “nose,” and they’ll help guide you through the mansion.

What would math class look like if it were a fine art?

Wahoo Public High School in Wahoo, Nebraska is by all accounts a school with ample opportunities for their students. They have the standard array of English, history, and science courses, with enough money left over for band, drama, fine... Continue →